Geotech were engaged as a subcontractor to complete slope stabilisation work below the State Highway to repair embankment slips and a substantial drop out, resulting from a severe weather event. A filled embankment (around 11m in height) was constructed using a terramesh system and geofabrics to bring the level back up to the road pavement level at the drop out site. Terrain was steep at the site, and access was difficult.

Geotech were awarded the tender to construct a shotcrete and soil nail retaining wall structure above State Highway 75 between Duvauchelle and Robinson’s Bay. The contracted works supplied included,construction of access to the work area and vegetation clearance; Excavation of a working platform; Construction of a shotcrete and soil nail retaining wall; Carpentry works, including construction of wooden stairs and hand rails; Installation of elevated stormwater and sewage pipe lines suspended from the wall face; Landscaping; Compaction of soils; Site rehabilitation, tidy up and demobilisation.

Geotech were engaged as a subcontractor to undertake rock removal at SH7A, Ferry Cutting. The rock to be removed was overhanging the road and falling, creating a dangerous hazard that could not be removed conventionally. The site was just past a narrow bridge, on a two lane stretch of road, with embankments on each side. A minimum of road closure disruption was required by the client, as the road leads into a high profile tourist town (Hanmer Springs). Geotech proposed a methodology utilising mass blocks to assist with ramping an excavator up to the required height, and milling the rock using an Erkat milling head. The option offered a high level of precision without the risk of additional damage to an existing poor rock mass that was actively failing. It also meant that staff were protected from any rockfall risk, and single lane access for traffic was able to be maintained for the majority of the contract works.

Operational from 1879 to 1890, the Banbury Mine was the first producing mine on the Denniston plateau. An underground coal mine, Banbury is now part of the high profile mining heritage site at Denniston. In 2008, the Department of Conservation, in conjunction with the Denniston Heritage Charitable Trust, undertook a project with a view to re-opening parts of the mine and tram line for a tourist heritage operation, now operational as the ‘Denniston Experience’. Geotech were engaged to assist in the establishment of a 179m second egress for the Denniston Experience, running from the mine to the surface. 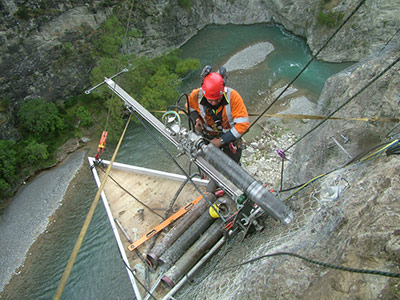 The Midland line is a 212km section of railway between Rolleston and Greymouth. The eastern abutment of the railway viaduct bridge at Broken River consists of heavily jointed greywacke, and required stabilisation. Geotech were engaged to undertake the rock stabilisation work. All work had to be done from ropes. The remote location and restricted access were two key issues when undertaking this project. A specially designed drilling platform was utilized with a specific environmental plan to prevent material entering the river water below.

Solid Energy New Zealand wished to mine a thick coal seam below the Mt. Augustus ridgeline at Stockton Mine near Westport. The coal was covered by up to 30m of overburden, which required removal to access around 4 million tones of high quality coal. The Coal Mining Lease boundary was located just below the coal measures. The adjacent land is conservation estate - known habitat of kiwi and the native land snail – Powelliphanta augustus. The possible effects of mining operations on the surrounding conservation lands and waterways needed extensive pre-planning, design and consent processes. The project involved high profile mining with zero tolerance for loss of water or rocks to the adjoining conservation estate lands. This project was the subject of considerable public protest and was under heavy environmental and media scrutiny. The process of accessing the ridgeline resource involved a range of specialised contractors. Geotech were the prime contractor, providing low volume, high end ground engineering.

The 7.7MW Amethyst Hydro power station was commissioned by Westpower in June 2013. The station is situated 5km east of Harihari. Water is taken from a streambed intake high up in the Amethyst River and transported to the powerhouse via a tunnel and penstock. Geotech was the primary contractor for implementing this project, which consisted of two key areas, being portal stablilisation and establishing the tunnel. 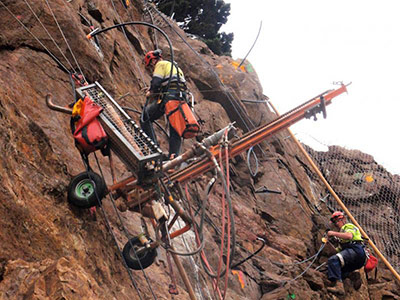 Following the Christchurch earthquakes the cliff face at Windy Point, above Lyttelton Port, required a geological assessment and stabilisation, to ensure the safety of port workers going about their essential duties. Geotech were responsible for removing loose debris, drilling rock anchors and securing rock mesh to the face of the cliff, to mitigate the effects of further aftershocks and to contain the rock face. 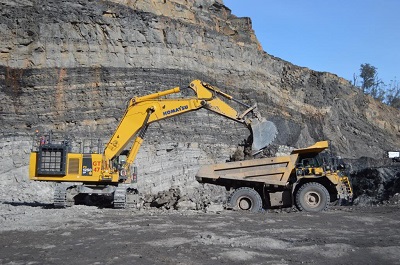 Geotech ran Strongman Mine on behalf of Solid Energy New Zealand based around a methodology of how to gain additional resource from the depleted and finished mine, this was done by using precision blasting to steepen up pit highwalls enabling extraction of the exposed coal. Geotech was responsible for funding, fleet configuration and maintenance, mine planning, resource assessment and extraction/production planning, that was completed over five years with 34 fulltime staff on site.